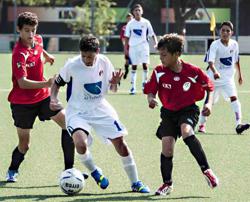 Do you seek elite competition in one of the most exciting soccer countries in the world? Look no further than a tour to Italy!

Italy is an incredible destination for soccer travel, training, and competition. Along with the incredible food, energetic culture, and captivating scenery, Italy has had a lasting impression on USAI and soccer programs across the nation. For over 28 years, United Soccer Academy has been customizing and coordinating programs to Italy for club and collegiate teams alike. Though these tours are undoubtedly untraditional, we genuinely tailor programs that fit your specific needs, level of competition, desires, and budgets. With United Soccer Academy, you will certainly experience much more than a taste of Italy.

In one of the most soccer-oriented countries in the world, teams, coaches, and boosters can experience the passion Italy has to offer; both culturally and athletically. Allow United Soccer Academy to coordinate a soccer program from training and tournament play to watching Series A matches, touring iconic stadiums, and attending professional clinics/camps throughout the country. Your team will have a once-in-a-lifetime experience both on and off the field with United Soccer Academy.

With our vast network of professional clubs and youth tournaments in Italy, we can arrange programs in the spring and summer from the southern city of Palermo to the breathtaking Como in the north.

Professional Youth Tournaments for ODP teams and top US club teams:
We can arrange for high-level US youth teams to play in top-level youth professional tournaments, compete against professional Italian and other European teams such as:

Tournaments for elite teams will take place throughout the Italian peninsula during the spring, summer, and fall seasons. Contact USAI on exact details- which will depend on the age of and level of play of each team.